Towards the end of the day last Tuesday, I got "Misery is the River of the World" stuck in my head. It wasn't because I love Tom Waits - I do, but that wasn't the reason. No, it was because I'd seen almost nothing but horrors and nightmares (almost exclusively perpetrated by our current administration) on social media that day. To be honest, it had been like that for days and days. Except on Tuesday, when I saw someone compare a thing the current administration is doing to the Stasi, I knew I'd had enough. I said to myself, and to a few friends as I explained the reason for my break from my formerly beloved Twitter, "Misery might be the river of the world, but that doesn't mean I need to swim in it constantly." A bit over dramatic? Yes. Still true.

And so, partially inspired by Derrick Jefferson, I quit. Obviously temporarily, since I posted this in all the normal places. I logged into neither Twitter nor Tumblr nor Facebook - other than to add things to the queue for Owl Zeppelin - for almost a week. It wasn't bliss, but it wasn't bad. The impulse to check came and went, but I got through it every time it came. I knew what I was getting into, though, since changing any habit is hard. The results weren't hard to predict, either... I am so much calmer and more in my skin than I've been ever in recent memory. Also, hella more productive - especially at home. I can't remember the last time I went more than a couple of days without checking at least one of my social media places, so it stands to reason I can't recall when I've been this calm and productive.

I did keep up with news during my time away. I've got a profile set up with IssueVoter.org, and they email me when there is legislation that is important to me so I can call my elected representatives. (Actually, I call Representative Louise Slaughter's Rochester office so often I think her staff are starting to recognize not just my name but also my voice.) I also scanned the front page of Twitter for big news items without logging in, and asked a couple of friends to let me know if anything major was happening.

It was great, but I need to be realistic. I hate the phone so much that social media is sometimes the only way I can keep in touch with some of my friends. That means I need to figure out a way to stay connected without losing my sanity to what's going on in the world. I need to be part of the social media communities I've built/been part of, but without ingesting all the horror and misery. That's going to be a problem, though. "Yes," I can handle. Likewise, "no." In between? Not so much. As a way to build my capacity for "a little," I'm going to try to spend no more than 30 minutes on social media each day - at least until it's a fully ingrained habit. I think much more than that and it won't be out of curiosity and genuinely wanting to catch up - more than that, for me, and it will be wallowing.

Finally, I'm posting about it here for a few of reasons: 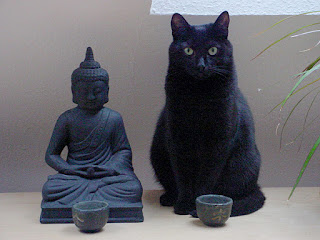 "Call no man happy til he dies," is a line in that Tom Waits song up there. That may be true, but that doesn't mean I can't try to find some peace along the way.
Posted by Jessica Olin at 8:31 AM