I've been thinking a lot lately about patrons - specifically about how to make them feel comfortable asking us for help. This is an eternal struggle, I know, but thanks to a librarian here I've been having new ideas about it.

Here are some things I know for sure:

Here are some things that I suspect are true:

I'm still sometimes left scratching my head when it comes to who will and who won't come to a librarian for help. Breaking through and getting people's attention and trust is so difficult, but it is so important. I pick at this conundrum a little at a time, but I doubt I'll ever completely complete the puzzle.

How about you? What do you do to make patrons comfortable asking for help? 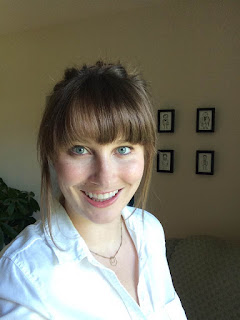 The job market is tough and there are any number of reasons that an application may not make it through to an interview, and many of those reasons may be as simple as “did not meet minimum requirements.” My experiences are with applying for jobs and serving on search committees at academic libraries, but I believe a lot of what I’m going to suggest is applicable across the board… with one caveat: if any of the advice given below goes against instructions for a specific position to which you are applying, ignore my advice.

This shouldn’t come as a surprise, but the very first thing anyone should do when applying for a position is to carefully read over the job posting. Usually the posting will contain all of the vital information you need about the position and will help you figure out what they are looking for, and whether or not you want it.

Next, look more closely for clues about what the search committee is really looking for in a job candidate. The job title, description, required qualifications, and preferred qualifications are all areas to key in on, but what you really want to be looking for is anything that goes beyond general descriptions and requirements posted to most job postings.

For example “MLS/MLIS from an ALA-accredited institution, or an advanced degree in _______ with a willingness to pursue an MLS/MLIS” isn’t unimportant, and you could see some version of this requirement on any academic librarian job posting. That alternate degree tells you what the focus of the job will be.

Although most job postings will usually refer to a “resume”, some academic libraries actually want is your Curriculum Vitæ (CV). A quick google of “Resume vs. CV,” will return plenty of results explaining the difference, but this one provided by theundercoverrecruiter.com is clear and concise.

“A CV is an in-depth document that can be laid out over two or more pages and it contains a high level of detail about your achievements, a great deal more than just a career biography. The CV covers your education as well as any other accomplishments like publications, awards, honours etc.

“The document tends to be organised chronologically and should make it easy to get an overview of an individual’s full working career. A CV is static and doesn’t change for different positions, the difference would be in the cover letter.

“A resume, is a concise document typically not longer than one page as the intended the reader will not dwell on your document for very long. The goal of a resume is to make an individual stand out from the competition.”

You should look at your CV or resume with fresh eyes every time you apply for a new job. You may not need to change much, but you might want to update descriptions or reorder bullet points to highlight experience that is most relevant to the particular job to which you are applying.

As a newcomer to the profession, the amount of experience you have may vary and that’s okay. If you don’t have a ton of jobs or internships to list you might also add large projects you did in library school that are relevant.

And if you don’t know where to start, try Googling “librarian resume sample” or “librarian CV sample” and use the categories you see there. You can also turn to the career center at the school where you got your master’s. They’ll be happy to help.

While having a strong and coherent resume/CV is definitely important, having a good cover letter is what will make you stand out as a candidate and may even help you to get an interview.

Some of what makes a good cover letter is personal and it takes practice to learn to write about your experiences in a clear and concise way, but there are also pitfalls that are easy to avoid.

Never be afraid to ask for advice or guidance. When I was applying to jobs I reached out to a number of librarians at my graduate school. I had never met most of them I had never met before I simply found their email on the library’s website and contacted them explaining that I was a current student applying for academic librarian jobs in their area of specialty and asking if they would be willing to meet with me, they all were. I also had my boss at the time and a few of my former internship supervisors look over one of my cover letters, which really helped me to focus in on what was important and cut out what wasn’t.

If you’re no longer in school or if you’re a distance learner, it is okay to contact a librarian at a university near you. Since taking my current job I’ve spoken to a number of people who don’t go to the school I work for, but wanted to talk to me about librarianship and I’m always happy to speak with them. We all remember what it was like to be new in the field, and we all want to help if we have the time.

Sarah is the liaison to the departments of English, Theatre, and Romance Languages at Villanova University’s Falvey Memorial Library. Her library degree is from the University of Michigan and prior to doing her MSI she did an MA in English at the University of Birmingham’s Shakespeare Institute. She tweets at @SgWingo.
Posted by Jessica Olin at 9:58 AM No comments:

The Office Decorations of a Director

A while back, before I became a library director, I had a very particular way of decorating my office. It was nerd central, but also it was occasionally vulgar. In fact, I wrote about it back in the (almost) beginning of this blog. Almost six years later, I have definitely changed the way my work space is decorated.

The thing about decorating your office is that it really does send a certain message to the people who visit you. Yes, you want it to reflect your personality, but that's not the only consideration. You want to make sure you are sending the message with your decor that you actually want to send, instead of something you're sending by accident. When I was an instruction coordinator (which was my job at the time I wrote that first post, if not my title), I wanted to be seen as irreverent and yet intelligent. Hard working and yet able to have fun. The truth was, though, that my office was likely a bit off-putting. I'm 99% sure it was Jim DelRosso who told me his office decorations are consciously not as nerdy as he is because he wants to make sure people feel welcome in his office. That comment really stuck with me. I still stand by the prevalence of vulgarities in that office - the word "fuck" is really just a word and I wish people would see it as such - but I haven't used that decorating style again in my current circumstances. As a director, I'm supposed to be setting a tone not just for myself but also for the rest of the department. So now, I have just as much nerdy vibe as before, but it's subtler and, in a way, prettier.

As you can see from the pictures I have below, I am not hiding my nerd in any way. I am still Nerd Supreme - a fact that is evidenced by being the advisor for the nerdy student group on campus. I'm just not as vulgar and my displayed tastes are slightly more diverse. 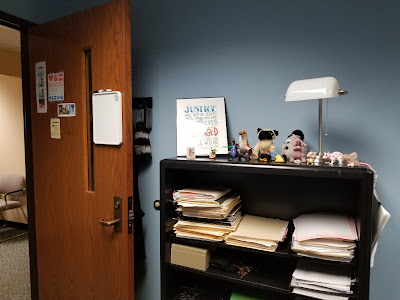 The love rat is still there. As is Fake Roy. But there's also a Benjamin Franklin quote and my tail from my Halloween costume. 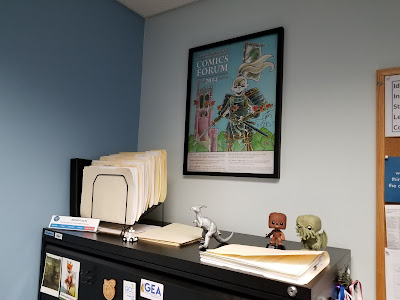 My boy, Usagi Yojimbo. It wouldn't really be my office without Usagi, and this is the signed poster that Ranti Junus got for me years ago. 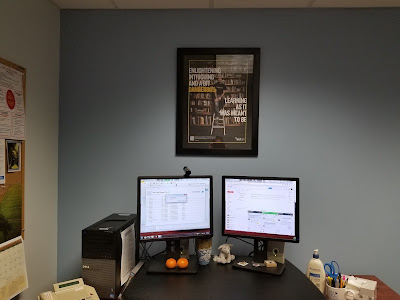 Yes, that's a stuffy elephant. If you squeeze it, out comes the most obnoxious imitation of an elephant trumpeting. Also, the poster from ACRL 2013 - Henry Rollins is a beautiful man and he had us all eating out of the palm of his hands at that keynote. 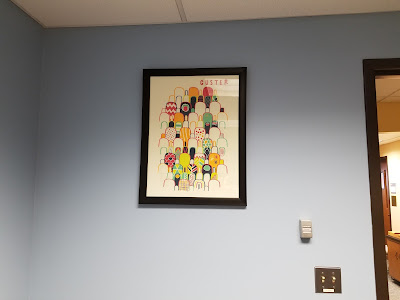 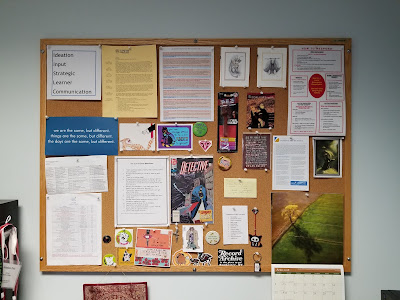 Yes, that's my "Detective Comics" #643. And a Chewbacca Pez dispenser. But also the library's mission, vision, and values statements; the 2017-2018 academic calendar; specifics of the standing pizza order I place occasionally for the club I advise; my mini Sarah Donner shrine; and so much more.

Is it obvious that it's the same person? Even if you couldn't see so many of the same items, I think it's obvious. Just a more welcoming version.

How about you? Do you have any rules for how you decorate your office? Please share in the comments!
Posted by Jessica Olin at 11:37 AM 1 comment: