This week is LIS Mental Health week. There's so much I want to say, and could discuss. There's the specter of a completely unqualified candidate for Education Secretary and the reality of the Gaslighter in Chief and his unconstitutional executive orders. We also have the same problems as before, working in a field that is chronically undervalued and underfunded. And then there's the ish of being in the Northern Hemisphere and getting less sunlight than we need this time of year. Basically, this is a recipe for hopelessness. The best way to fight that is to make sure you take care of yourselves. This is too important a time, and we need every single one of you. 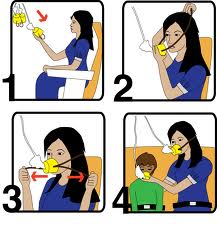 I really hope this doesn't come across as preachy, by the way. I know I need self-care reminders, so I'm sharing. Here are things we all need to do. Also, I fully acknowledge that I've covered some of these topics before...

Sleep. You are not going to do anyone any good, least of all yourself, if you are running on empty. And if you are having problems sleeping, talk to a medical professional.

Try to limit the junk food. This is one where I have problems. I know m&ms are going to make me feel like crap, but I still eat them. Instead, try to eat peanuts or an apple.

Get outside at least once a day. And don't just pass through it. Actually stop and look around. Say hello to the squirrel who is yelling at you as you park your car, or notice the exact color of the sky.

Laugh and cry. You need these releases. I cannot not laugh when watching Death at a Funeral (British version for me, thanks) and I cannot not cry when watching Lilo & Stitch (that scene at the end where he explains his family guts me every time), so when I need a release I'll watch these.

Take care of yourself medically. Don't ignore a persistent cough or a part of your body being sore. If your hopelessness (or anxiety, or mental numbness) gets away from you, go to the doctor - there is no shame in needing medicine.

Try to be self-aware. This can be extremely difficult, I know, so I recommend the tool I use - it's a checklist titled "Everything Is Awful and I'm Not Okay: Questions to Ask Before Giving Up on Yourself."

And most importantly, pay attention to your victories. Small victories like bringing your lunch from home or emptying the dishwasher. Big victories like speaking up for yourself or supporting a protest. Write them down and cherish them like the jewels they are. They're your best weapon against the dark. 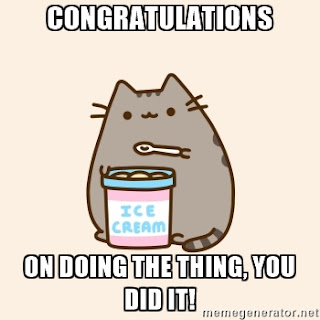 Posted by Jessica Olin at 4:29 PM No comments:

Email ThisBlogThis!Share to TwitterShare to FacebookShare to Pinterest
Labels: lismentalhealth, Self Care

I've been struggling with how to write this post, and I'm still struggling with the concepts. The idea of freedom of speech is foundational, especially how it intersects with libraries and librarianship, but I'm still working to wrap my head around it. There are a lot of great pieces out there about library values, such as a post written by Meredith Farkas. Then there's the whole Operation 451 effort that is also along these lines. I admire these, and am - to some extent - using them as a springboard for this piece. However, the reason I've struggled with this is that freedom of speech, especially the library's role in that speech, is at best muddied waters. (Sorry for using such a cliched descriptor, but "muddied waters" is still the most apt phrase.) What I'm trying to say is that my writing here is my way of working through my thoughts.

First, we have that infuriating but also beautiful document, The Bill of Rights, that established - among other things - the idea of freedom of speech. "Congress shall make no law respecting an establishment of religion, or prohibiting the free exercise thereof; or abridging the freedom of speech, or of the press; or the right of the people peaceably to assemble, and to petition the Government for a redress of grievances." Holy heck, yeah! Give us, the people, the right to yell at our Government, to speak up and out. And let us be exceptionally and explicitly clear here: this prohibits the government, not your neighbor Bob, from curtailing your speech. Bob can stuff it, anyway.

But whenever I think about the first amendment, I think about the fact that there are legal and just exceptions to that freedom. Child pornography is not covered by the first amendment, and neither is hate speech. That makes sense, though. Things that will lead to or are included in committing a crime are generally indefensible, right? But then we come to community standards and who's writing the laws. Things that are legal aren't always right or just.

Add to this the fact that libraries do selectively censor - no matter what anyone says to the contrary. I know of one big library that has some porn, but it's in their special collection and is tied to an alum, but your average library doesn't have Debbie Does Dallas in their DVD collection or Penthouse in with their periodicals. We spend our money as best we can to support the efforts and needs of our communities, and sometimes whether by purposeful or unthinking omission, things get left out. No matter how much students at my school might joke about wanting Playboy, we don't have it (somebody added it to a poll we ran asking students which popular press magazines they wanted here).

Even with all this, I still believe providing access is one of the most important things a library can do. Like it says in Article V. of the Library Bill of Rights: "A person's right to use a library should not be denied or abridged because of origin, age, background, or views." At my library, we serve our community to the best of our ability, but it's a balancing act. Yes, all students and faculty and staff are welcome, but if someone is being overly disruptive, violent, or is caught destroying library property, they will be escorted out of the building.

It's not easy to find my way through this issue, but something this important shouldn't be easy. We do need to think about those who are holding the purse strings, but we can't always bend to their dictates. We do need to consider community standards, but sometimes the community is flat out wrong. We do need to protect and provide access to speech, but not hate speech.

I guess what I'm trying to say is I'm still trying to suss out where I stand on all of this, on the interplay of community and legality and access. I'm trying to figure it out both personally and professionally. I know believe in freedom of speech, but not as an absolute. I know it seems like a lifetime ago, but really it was just two year past that we were saying: 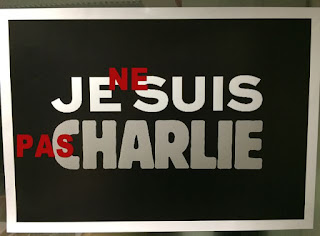 I hope you all will join me in a careful consideration of what we mean by library core values, but most especially what we mean by freedom of speech.
Posted by Jessica Olin at 12:36 PM No comments:


I have a few other posts in the works, including some timely political stuff, but I woke up this morning thinking about the farce that will likely be the senate confirmation hearings this week, and realized I need to write something else instead. At best, the next four years are going to be grueling and perhaps even thankless work for those of us in education and libraries. I wanted to write myself a reminder - and to share it with all of you - of why what we do is worth the work. We need to keep our eyes and minds on the why so I can keep rolling the boulder up the hill.

So, how about you? What are the reasons you get out of bed and go to work every day? What makes librarianing your thing?
Posted by Jessica Olin at 10:34 AM 1 comment:

Email ThisBlogThis!Share to TwitterShare to FacebookShare to Pinterest
Labels: Library As Place 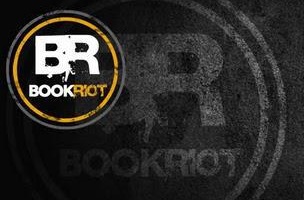 Like a lot of people, I did the Book Riot Read Harder Challenge last year. I finished the book for my last required category on December 30, 2016, just in the nick of time. I'm so happy with myself for completing this challenge. I stretched myself with some of these books, but mostly I was looking for a way to knock things of my forever long To Read list. It didn't quite work out that way, but I still had fun. Here's what I read for each of the categories, and what I thought of each.

I had so much fun doing this challenge. Even the books I ended up hating weren't wasted effort. For instance, I've always thought I *should* read Eugenides, and now I know I don't have to.

In 2017, I'm going to do a different challenge - something I've designed for myself. Like so many other people, I buy more books than I read... and I put even more books on my GoodReads To Read list than that. So for 2017, I am going to make myself stick to the unread books I have already decided are worth reading - whether by purchasing them or by putting them on a list. I'm going to allow myself a loophole, however: if one of my favorite authors publishes a book, I can buy and/or read those books, too.

I'm claiming this goal publicly in hopes that you'll help me stick to my goal. I have so many unread books on my shelves and on my To Read list that it would take me around 17 years to read them all if I read at my current rate. I know I'll give up on and/or change my mind about some of those book, but I'm never going to get through the list if I keep adding to it.

So, I've got a lot of reading to do. Feel free to give me this look if you find out I'm breaking my promise to myself.

How about you? What are you planning to read this year? Or are you just going to take it as it comes?
Posted by Jessica Olin at 11:34 AM No comments: