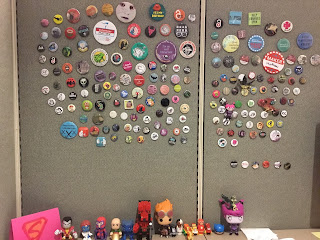 How long have you been in the field?I started this (my first professional library job) in January of this year. (Wait, doesn’t that make ME the young librarian? Why am I writing this?)


How Do You Work?

What is your office/workspace like?I have a cubicle decorated with buttons/pins, some nerdy toys and a “thank you” card from my coworker’s daughter after I gave them a copy of a volume of DC Super Hero Girls. (I also have some posters of NASA’s Space Tourism series that I haven’t gotten around to putting up yet.) I find it pretty cold, so despite wearing multiple layers of office clothing, I sometimes end up also wearing a hoodie and fingerless gloves (to be fair, I am just generally cold…). There’s no natural light unless I go over to the other side of the office, but if I do that I just see the creepy pyramid (Las Vegas is weird). The library building itself is relatively new (it opened in 2001), big (five floors), and nice! During the school year it is almost always packed with students using our public computers and study spaces.
How do you organize your days?We have Google’s Education Suite at work, so email is through Gmail and everyone has a Google calendar. This makes it really easy to organize meetings, because you can see when people are available. (You can also easily block out time to work on projects to prevent other people organizing meetings with you.) I try to keep “to do” lists for projects I need to work on, but I’m not always successful at keeping them up to date. I’m getting better at setting deadlines for other people (to give feedback on reports, etc.), because otherwise I’ll discover that yesterday afternoon a bunch of new comments were left on something I thought was finished.


What do you spend most of your time doing?
Writing (and rewriting) project plans, emails, reports, help guides, and other documents. We recently finished up a pilot project dealing with ORCID integration using their API. When that was happening I was spending a lot more time looking at (and formatting) python scripts and XML files.
What is a typical day like for you?
I check to see what meetings I have and if there’s anything I need to do for them. Then I check my email and see if there are any new ones I need to read/reply to. Then I’ll start working on any one of a number of projects depending on when I need to get them done, how much free time I have available that day, and what a coworker with whom I work closely on certain projects is doing that day.
What are you reading right now?
I co-host a podcast called Book Club for Masochists that chooses a random genre every month that we then read and discuss. For instance, in October we’re reading dystopian novels, though I haven’t started any yet (suggestions are welcome!). I just finished an ARC of Paperbacks from Hell, which is all about paperback horror novels from the ‘70s and ‘80s.

I’m also always reading about a billion comics and graphic novels. I recently read The Private Eye by Brian K. Vaughan, Marcos Martin, and Muntsa Vicente which is a neat cyberpunk story set in a future several decades after all the private information in “The Cloud” went public.

At work I am no doubt reading something about research data management or the latest scholarly communications scandal.
What's the best professional advice you've ever received?
Before I started my Master’s in Library Studies I was told that what you do in class doesn’t matter; it’s what you do outside of class that will get you a job.

Also, know your limits and boundaries; sometimes it’s better to say “No” to something than saying “Yes” and becoming overwhelmed.

What have you found yourself doing at work that you never expected?
Learning Python (though really, it had to happen someday). Being asked to help organize an event because I am an expert in zines. Being chair of a hiring committee.

What is your favorite word?
Resist.

What is your least favorite word?
The USA’s president has pretty much ruined the word “trump” forever.

What profession other than your own would you love to attempt?
Writing and/or editing comic books. (Someday!)

What profession would you never want to attempt?
Capitalist. Any job that would require me to be at work before 8am.

What superpower do you wish you had?
One of those powers that can be used to help other people and/or the environment—like widespread, permanent super-water purification.

What are you most proud of in your career?
Every time I am legitimately able to help someone learn something or gain access to information. Plus: Co-organizing the Zine Pavilion, presenting about comics and libraries at San Diego Comic-Con and Emerald City Comicon, co-founding and editing a student journal, and helping create a Raspberry Pi powered book recommendation machine.

If you're willing to share, tell about a mistake you made on the job.
Swearing in front of my boss’s boss.

When you aren't at work, what are you likely doing?
Recording/editing my podcast (38 episodes so far!), publishing seven (almost eight!) issues of Two-Fisted Library Stories (a fiction/comics anthology zine), running Cthulhu related role playing games, reading comics and books, reading about comics, editing for No Flying No Tights (a comic book website for library folk), writing postcards to people, obsessing about social media, playing Pandemic Legacy (just about to start June: four wins, four losses), playing video games, and insisting I don’t have to go to bed yet.

Who else would you like to see answer these questions?
Violet Fox. Annie Pho. Sarah Houghton. Amie Wright.


Matthew tweets at @MidniteLibrary.
Posted by Jessica Olin at 12:04 PM