Mr. Viktor, my gray tabby boy, came into my life about a month after Martin the Gozerian died way too young. V was exactly what I needed in my life. He's boisterous and gregarious and goofy - definitely not to be ignored. More important than his good taste in music, as seen in the above (I like Paul's Boutique a lot, too), he's seriously the most happy-go-lucky cat I've ever known. (Except when it comes time for me to wash the bed linens. Then he gives me a face. See below.) 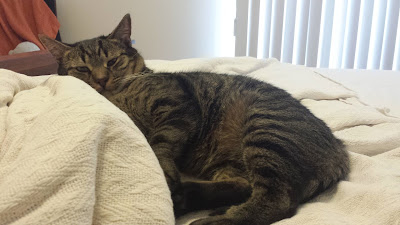 People with whom Viktor has made friends:


If the rescue organization that brought him into my life is to be believed, Viktor has always been this way. Apparently when they found him, he was in the company of some much younger kittens. The rescue group assumed he was a she, and the mother of the kittens, because of how affectionate Viktor was with the littler kits.

Actually, the only creature I've ever seen him treat with anything less than full on, storybook, eternal love and devotion...? Is my other cat, Zephyr. But even with her, it's more like a kid brother pestering his big sister. (Before you ask, no - they aren't related. I know they look it a bit, but it seems tabby is just very common coloring among Delaware cats.) 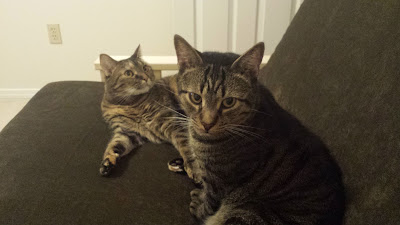 And last, but not least, is the fact that he has very refined tastes in cinema. He is watching The Seventh Seal in that picture below - and he watched it very intently for almost the whole film. I'm still trying to figure out how I feel about this striking film by the auteur, Ingmar Bergman, but there's no doubt that Viktor is a fan. 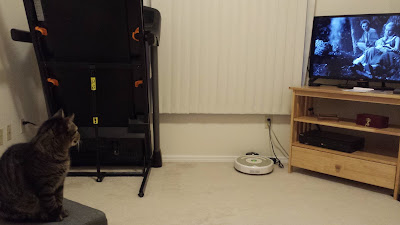 Here's to my odd little man - long may Viktor reign over my apartment and life.
Posted by Jessica Olin at 8:42 AM