Meetings, Meetings, and More Meetings - But For Good 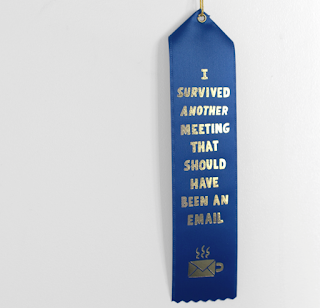 I know what you're going to say - all meetings are useless and most are a big pain in the butt. And, to be honest, I used to agree with you. Not anymore. It all changed when I moved into administration, but I couldn't put it into words until now. I spent a lot of time setting up one-on-one meetings with every single person who works in my library, which wasn't the norm before, and explaining why to each of them is going to help me explain to you why meetings can be for good.

I'll give you more detail below, but if you don't have a lot of time to read, the tl;dr is one of my biggest themes on this blog: relationship building. Now, in no particular order, here's what I mean:


Yes, meetings can be a pain in the tuchus. Some days it feels like that's all I do, which doesn't even touch the annoyances that accompany finding coverage for when I need to meet with someone who exclusively staffs a service point. But wow, is it worth it.

So how about you? What do you like about meetings?
Posted by Jessica Olin at 6:39 PM