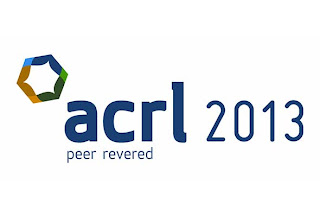 I'll admit it. I had low expectations going into this. I've written in the past about how I'm not a fan of big conferences. I mostly submitted my roundtable proposal so I could have an excuse to go hang out with my roundtable co-leader and to hear the Henry Rollins keynote. And if those two things had been all I got out of attending, it would have been worth it. Ayanna *is* pretty awesome, and Rollins was even better than I'd anticipated: he gave me a catch phrase I'm adopting for my own. But that wasn't all I got.

Below you'll find the first part of an overview that I decided was too long to be just one post. Part II will follow next week.

From the program: "Battle Decks is an event where speakers present PowerPoint presentations they have never seen before. Some people call it 'PowerPoint karaoke.'  It's fun for participants and audience members alike and helps hone your presentation skills. A few audience members will be asked to compete. Are you game?"

I went mostly to humor my friends. The event itself held no appeal for me - seemed too "cool kid" for me. Wow, was I wrong. It's hard to describe what it was about Battle Decks that made it so fantastic, but when someone is presented with a theme and a random set of slides (random and hilarious) and is then expected to give a speech that makes sense? Hilarity ensues. I'm proud to say that this year's winner is a past contributor to this blog.

The roundtable I co-lead was "'You Have Stephen King? Really?', Or, The Role of Popular Reading Materials in Academic Libraries." The best thing about it, in my opinion, was that people actually came. Heck, we had to pull an extra chair over. The conversation was great, as well. Even though I was one of the people leading the discussion, I still got some new ideas out of it.

Not as big as the exhibit floor at ALA, but still pretty darned huge. It was still big enough that I didn't get to visit all the booths. Actually, I was confused (still am, to be honest) about why the exhibit floor wasn't open for the entire run of the conference - or at least for more of it.


Well, that's as good a stopping point as any. Next week I'll write about the sessions I attended and some of the things I gleaned. For those of you who were able to attend this, or previous, ACRL conferences - what was your favorite part?
Posted by Jessica Olin at 9:23 AM