"What If You Already Have The Job You Want?": Revisiting Professional Dress 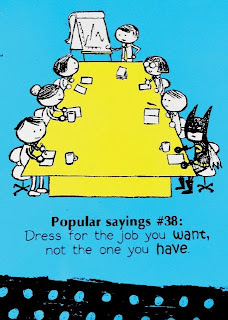 I know I've already written about how I dress at work, but wardrobe has been on my mind again lately. This is partly because of an article from 99u on the topic, but it's also because of my new job.

The new digs haven't changed my own wardrobe as much as I thought they would. Not yet, anyway. Sure, I no longer wear jeans on Fridays, even dark washed ones, as I did in previous jobs. I'll admit that I've been seen twice in my building wearing jeans, but in both cases it was a brief thing - one time was because I dropped by on a Sunday while I was out doing errands, and the other was because I changed into jeans at the end of my day before going to a casual event right after work. Other than that, I still hover in what I think of as the nicer end of "professorial".

So, no, I've not been obsessing about what I wear to the library. Instead, I've been thinking about what the rest of the staff wears. My library is small enough that everyone works with the public, so we're all subject to this. Sure, I have different kinds of people working here - librarians, clerks, student workers (and the students are my main concern) - but members of our community aren't necessarily going to notice the difference. Just like my thinking about gossiping versus community building, I'm hoping to find a balance between approachable and way-too-casual. There are some things that are obviously wrong: ripped jeans, super-tight t-shirts, cleavage (either bosom cleavage for the ladies or plumber's crack cleavage for either gender). However, just like I don't want extremely casual, neither do I want everyone who works for me to come in looking like they're about to walk into a courtroom.

After those clear examples, things get a bit more muddled. For instance, I'm sure most people would agree that ragged, worn out sweatshirts aren't appropriate, but what about brand new ones that are holiday themed or that bear the name of the college where my library is located? There are other examples where the line isn't obvious, so I'm not going to change any policies until my thinking is clearer. The two things I know for sure are that I want members of our community to feel they are dealing with professionals and that I don't want my staff to dress in a way that is off-puttingly formal or informal.

I'm continuing to noodle my way through my ideas, and I've found a few good dress codes that are helping me make decisions, but I'm wondering what you all think. Finally, for the record, in reference to the above picture: if any of my staff came in dressed as Batman, Hellboy, or even Multiple Man, I'd probably be okay with it. I am a proud nerdbrarian, after all.
Posted by Jessica Olin at 8:59 AM