Unpacking to Move, by Angela Galvan

“Just move for a job” is advice The Profession enjoys doling out from positions of relative stability, a living wage, a healthy body and mind, and an established support system. As an MLIS student in Columbus, Ohio, I heard it from day one of my program: if you want a career you’re going to have to move away.

I have some experience with this.

Back in 2009 I fled a small town in southern Oregon for Columbus, Ohio, with two bags and only the clothes on my back to move in with people I’d met over Craigslist. What the Craigslist ad couldn’t have told me was I’d managed to install myself in a group of friends with no less than five librarians. Again, the job market in Ohio is a little saturated with MLIS holders. They convinced me librarianship was a good fit for someone with the combination of “curious about information and how it works” and “professional boxer” which is to say I used to be in the service industry.

I was happy in Columbus for years. I had a community, a mentor who was the big brother I never knew I needed, and a boss I could communicate with exclusively in emoji. I got Midwest winter bragging rights by walking to work during the vortex. All of this would change when I started getting campus visits out of state.

I eventually accepted a position at a college town in New York with Population: Some Folks. This was a Big Fancy Librarian Job, the thing we’d hoped would come. My partner would follow me in spring and I would learn to drive—a remnant from my Portland upbringing—and we were headed for a future with Pinterest boards until we weren’t anymore.

The everyday of my personal life was hit by a landslide. I could recognize some of the world I inhabited, but it was now fundamentally different. I lived alone with the cat who was not outpacing crawly things, in a shoebox apartment where I made soap and taught myself guitar until I lost sensation in my fingertips. Something about the fret action. The dream of gentrification without a surrounding city.

I formed an armistice pact with the spiders, who became confident, gun slinging assassins in the increasingly rich fantasy life my brain produced to deal with isolation. The payroll spider who lives in the sparse kitchen cupboard is named Perry. He has an eye patch and smokes. Worse, I couldn’t drive and the only school available to remedy the issue closed. A creepy clown allegedly appeared near campus and I became convinced I was living in the lite version of a Stephen King novel without a fun curiosity shop. Unable to leave town under my own power, I threw myself into my new job for a distraction. This kind of worked until I went home and there was nothing to do but unpack boxes for a life that felt distant to the point of invoking dig markers, stakes, and string. Most of my carefully packed possessions went to Goodwill. I spent many hours learning silence. Stillness felt uncomfortable for me after such a long period of searching, applying, and moving.

If I had the choice I would still move, though I can’t say I would have picked a rural area without addressing the mobility problem. While work/life balance in reality means periods of time where work takes priority, being a whole person who isn’t consumed by my job makes me a better librarian.

If you’re looking to move, here are some things to consider I haven’t seen in the usual discussions of relocation:

Librarians—as most service/helping professions do—tend to gain significant swatches of their identity through work so while it’s tempting to lean hardest on coworkers for emotional labor and support, there’s a whole host of other things to try. Many of these are from the advice blog Captain Awkward:


In the absence of people, a critter helps. Here’s mine: 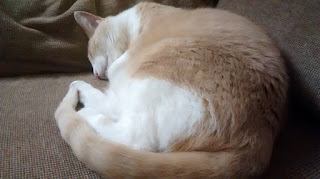 It’s hard to know what a place is really like until you’re living there. It’s hard to know a job until you’re in the minutia of things, first encounters with ‘other duties as assigned’ or have a true understanding of the workplace culture from a campus visit. Moving feels final because of how exhausting it is under the best conditions. Adjusting after a move like this requires time, patience, and most of all kindness. Feel the feelings. Hug the animal, person, or thing.

What do you wish you’d known when you moved? Share in the comments!


Angela Galvan is the Digital Resources & Systems Librarian at State University of New York, Geneseo. She tweets at @panoptigoth.
Posted by Jessica Olin at 9:08 AM