All the Hugs and (Sometimes Problematic) Social Justice: Preliminary Thoughts on ACRL 2017 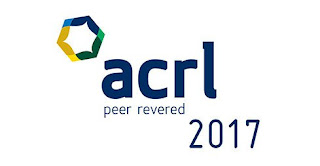 I'm sure there's a better way to organize my thoughts about attending ACRL in Baltimore, but chronologically seems the best way right now:

Wednesday, March 22.
First thing I did when I got to Baltimore was to head straight to the Critlib Unconference. And the first thing I did, after getting registered and finding a place to sit, was to hug someone I adore.

If you were unable to attend, the Critlib organizers set it up so you could still benefit from the conversations. Attendees took notes and uploaded them to some Google Docs linked from the Program page on the website for the 2017 Unconference.

There were so many great moments, like when I learned the term "recovering racist" (like recovering alcoholic, you're never 100% recovered) or when someone went on a long rant about how our classification systems are an example of white supremacy. I walked away from these sessions wishing I had some practical next steps I could take, but I did a lot of learning and listening so I'm well satisfied with the time I spent. Highly recommended, if you ever have the opportunity.

I skipped the opening keynote in favor of getting registered and settled in my hotel room, and then headed back to attend the opening reception. I have to admit that I mostly attended this to get some free eats, and once I'd filled my belly with hummus, fried mac & cheese balls, and a very yummy salad, I headed out for more socializing. The Alewife Gastropub was everything I'd been promised, and we had a great time hanging out and drinking yummy beer.

Thursday, March 23
The first thing I did on Thursday was to attend my own panel, “Library Leadership and Gender: Expectations and Lived Experiences." There was a lot of talk on the session hashtag, #libleadgender, and the room was pretty full, but the best part of this for me was how interactive the session was. We wanted it to be a conversation, and that's exactly what we got. The article that Michelle Millet and I wrote was intended to be the beginning of a conversation, and we were both absolutely chuffed at how well it went. Being nice shouldn't be a requisite for leadership, nor should it be a prohibition.

Next, I attended "Resilience, Grit, and Other Lies: Academic Libraries and the Myth of Resiliency." In a nutshell, the panelists (Angela Galvan, Jacob Berg, and Eamon Tewell) showed us that this false narrative makes it the individual's fault, and not the system's, because if the individual fails then they weren't resilient enough.

After that was Roxane Gay's keynote. Wow, wowee, wowzers, did I love this keynote. This is my third ACRL, and I didn't think anything was ever going to top Henry Rollins' talk in Indianapolis. There have been other great keynotes, at ACRL and ALA, but Henry Rollins' had us all halfway in love with him. And Roxane Gay absolutely blew him out of the water. She knew her audience, too, as was evidenced by her joke:

Gay spoke to us about how she doesn't want our guilt or our shame, but instead she wants our fight. She also spoke to how there is no high road with the current administration, so we need to go "subterranean." I was so charged up that I was a little in tears - this was the kind of hope giving moment I needed from ACRL. The line on which she ended both gutted me and recharged me for the coming fight:

As empowering as her speach was, the Q&A was just as disheartening. April Hatchcock getting up to show (and these were her exact words) "her little black face," made up for some of it, but it was still kind of a Nice White People Trainwreck. However, I and others already critiqued the way people talked to Roxane Gay, extensively, on Twitter. Long story, short: a bunch of nice white people were looking to her for forgiveness and didn't get it - instead we got called to do the work.

After the keynote, I moved onto more socializing! I had lunch with the three other members of the Frye Leadership Institute, Class of 2012, who were at the conference. I hadn't seen most of them since 2012, so it was nice to catch up. I went to see a friend's poster, did some arts & crafts, met with my coteacher for the LITA class I taught last year & will be teaching again this year, hung out with other College Library Directors Mentor Program alums, and finally went to the Conference Chair's Reception. The reception was at the Peabody Library, which is a building that looks a lot like my idea of heaven (cathedral of books!).

Friday, March 24
My first session on Friday was "Who Steers the Boat? On women in a feminized profession," with Roxanne Shirazi, Emily Drabinski, and Nicole Pagowsky. A quick side note, that echoes something I think Emily Drabinski said - what was up with the organizers scheduling the heaving hitting feminist sessions first thing in the morning? Don't they know we need our sleep? Anyway, this session felt like the perfect counterpart to my own panel the day before - these panelists talked to us about the history of gender in our profession. The room was absolutely packed, and rightly so.


After that, I spent more time socializing. First, I caught up with a friend who was the one to get me to start presenting, and then had lunch with my CLDMP mentor (who will also be my co-presenter at the Maryland Library Association / Delaware Library Association annual conference in May).

After lunch I went to one of the most practical sessions of my conference - Verna Myers' talk, "What If I Say the Wrong Thing: Interrupting Bias in Ourselves and Others." I could write an entire post about what Myers said during the hour she had us in that room, and I can tell you she said a lot, but this post is getting a bit long already. Instead I'm going to urge you to look for her writings elsewhere. I've not watched it yet, but she also has a TED Talk. Two key takeaways that I had, that are immediately applicable:
After Myers' talk, I finally took time to walk around the exhibits floor. I also managed to fit in more socializing while walking around, and I also picked up some swag for student contest prizes. Also picked up some chocolate.

Next up was Nicole Cooke's invited talk, "How would you like to be remembered? Expanded your pedagogy and professional practice." Cooke spoke about how she's worked to integrate diversity studies at The University of Illinois at Urbana-Champaign.

"Librarianship may be notoriously white and female, but our communities are not." @LibraryNicole #acrl2017
— Jessica Olin (@olinj) March 24, 2017

For those of you who saw me tweet a plea for someone to talk me down from the ledge because I'm once again considering a PhD, it was listening to this talk - and hearing about the impact Cooke is having - that has me thinking this way. And no, all the talk of (a) intellectual hazing, (b) where will I find the money, and (c) the job market, hasn't stopped me from thinking about it. Being able to help, and shape, the next generation of librarians is a big draw for me.

Up next was...? You guess it: more socializing. A small group of us went to the aquarium where I made a new friend, who I named Steve: 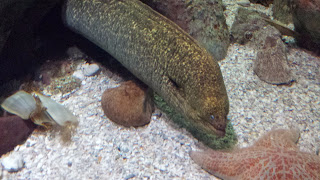 I also got to pet a ray, a horseshoe crab, and a jellyfish! And we decided to have dinner at the aquarium, where I ate one of the tastiest black bean burgers I've ever had.

Then it was on to the All Conference Reception at the B&O Museum. There were too many people. The drinks were hard to get, and I ended up drinking Heineken (the horror!) at one point. The band was a perfect nightmare of a bar mitzvah/wedding band that played everything from Journey - which was okay - to Whitney Houston - which was just so awful I can't even speak to how awful it was. And the acoustics in that space made their music even worse. If the Peabody Library was my idea of Heaven, then this place was definitely my idea of hell. The party was so bad that it ended up being funny and we had a good time complaining to each other about it.

Saturday, March 25
Yes, I was on a second panel. Yes, it was also first thing in the morning. But I didn't really mind, because "More Than Just Play: Board Game Collections in Academic Libraries" was a fun way to start the day. We had an amazing turn out for first thing in the morning on the last day of the conference, and people who came to our panel really seemed to have fun. Which was what we'd intended, since we set the thing up like a game of Jeopardy.

And after that, I went home. I did not sleep well and, since I drove to the conference, I didn't have to wait for a plane to take me. Oh, boy, did I need the nap I took when I got home.

How about you? What were the highlights of the conference for you, if you attended? If you didn't attend, which sessions looked great from the Twitter stream?