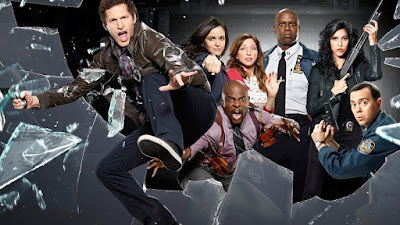 I know I'm late to this particular party, but wow I'm in love with this show. I'm going to try to write this with minimal spoilers, and as a result I'm not going to be able to write about some of my favorite things about the show.

My favorite thing about this show? How intersectional it is. There are two Hispanic women characters, Diaz and Santiago, and neither are a stereotype. Also two African American men, also not stereotypes. In fact, the only stereotypical cop behavior - donut eating anyone? - comes from two older, white men. Later on in the series, one of the characters says something like "I liked that movie up until the end when it got a bit transphobic." A character on a prime time, network television show that says the word "transphobic"? Sign me up. (One caveat: this series is fatphobic at times, but that's the only drawback for me.)

Another thing to love is that characters are allowed to grow and change. They are so relatable! The relationship between Amy Santiago and Jake Peralta is one, small example of this growth. I adore watching Gina grow up and yet not grow up. Some characters soften over time, and others harden (but in good ways). Even secondary characters have growth! Detective Lohank, anyone?

The fact that they don't shy away from hard issues also pleases me. Subjects like police brutality, racism, sexism, and homophobia are in the mix on a regular basis. Best part? The show also doesn't rely on stale and boring tropes to make these topics fit the comedy of the show... like the time there was a joke about same sex marriage, but the joke was that they were so worried it wouldn't stay legal that they rushed through the ceremony.

When I first announced on Twitter that I was going to watch this, someone (I don't remember who - sorry!) asked me to let them know my favorite running gag. I also have a couple of favorite characters to share:

Favorite running gag: Die Hard. Jake Peralta's obsession with this movie series is beyond over the top, and it reminds me so much of how obsessed I get about things - like Brooklyn Nine-Nine for instance. The title of this post comes from an episode where Jake's obsession gets to be the basis of an entire episode.

Favorite regular character: Captain Ray Holt. Here is a man who is open and honest about who he is - a gay, African American police officer - and does not let it stop him from going after his dreams. The moments when he can admit his own mistakes and grows as a result are some of my favorite moments in the series. I recently took a Buzzfeed quiz, "Which Brooklyn Nine-Nine Character Are You?" and even though I didn't game the quiz in the slightest, I got Holt as my result: 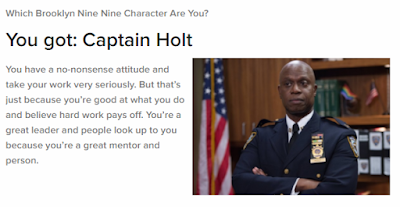 Favorite recurring character: Doug Judy. If you've watched this show, you can probably guess why I adore him. He's got charisma and charm and is all about playing into your stereotypical expectations while also flouting them. By the time I got to his most recent appearance on the show, I actually clapped when I saw him come on screen. And oh wow when he sings...


Okay, so if you already know this series, what's your favorite thing? And if you haven't watched it yet, have I convinced you to give it a go?
Posted by Jessica Olin at 10:27 AM