It's laughable, but at one point in the not too distant past I disliked Parks and Recreation. Of course now I know it's just that I disliked the first season (although even that makes me laugh now). It's laughable because I love this show so much that I made that cross stitch below for myself.


I'm sure I'm preaching to the converted with this post, since I was late to the P&R game, however, I still want to share some of the things I love about this show. Be warned: thar be spoilers ahead!

Actual Positive Portrayals of Fat People
I mean, seriously, can we talk for a moment about how beautiful Retta is? And how they never use her size as a punchline? Also, can we talk about her fashion sense? And how sought after she was as a date? F'reals, she gets to marry Keegan-Michael Key. It doesn't get much better than that. And did you notice her wedding dress? Dang. 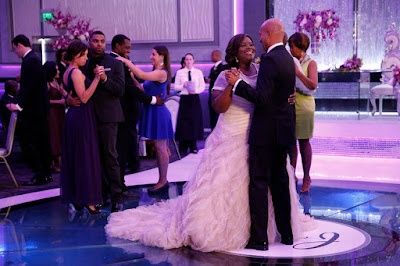 Relatable Characters
Once I realized how fantastic this show is, I tried to get everyone I know to watch it. I finally got my best friend to take the plunge by explaining that she is the Ann Perkins to my Leslie Knope. After my friend had watched a bit of the series, she admitted the comparison was dead on. I think the characters are as relatable as they are because the writers don't use all those tired tropes we've seen a bazillion times before.


Making Fun of Librarians
It's part of being in this profession: everyone makes sure you know about popular culture representations of librarians. (Do other professions get that?) Usually when it happens it's a shushing nightmare of a stereotype, but in the case of Parks & Recreation, librarian representation is a good thing. A lot of librarians have taken to calling ourselves "punk ass book jockeys" in honor of this show.

So how about you? What's your favorite thing about the show? Megan Mullally? Ben's nerdery? Champion the tripod dog? Or is your favorite the same as mine: that people grow and change and evolve in this show in ways that make the characters feel like family.
Posted by Jessica Olin at 7:01 AM