Just for Fun: A Long Time Ago in a Galaxy Far, Far Away

I've loved Star Wars as long as I can remember. Playing the soundtrack of A New Hope and acting out the scenes was a required activity whenever my cousin came to visit. I always got to play Leia, and I have clear memories of trying to escape Darth Vader by hiding behind my father's La-Z-Boy recliner.

I saw The Force Awakens opening weekend and I'm still having a hard time articulating exactly why I loved it so much. Instead, here are some of the things that I love about the entire series.

The Music
That soundtrack I mentioned up above, the one that accompanied Josh's and my childhood games...? I own that original vinyl that my parents played for us. Besides, how much better does it get than the John Williams' music?

Chewbacca
I love Chewbacca. Deeply. Another thing I own that some would call "vintage" but which I would call "a relic of my childhood" is a stuffed Chewbacca. I lost his bandolier somewhere along the way, but I've never lost Chewie. Last December, which was the last time I watched the original trilogy, I pulled out my stuffie Chewie but was too slow. The dearly departed Holly claimed him before I got a chance. 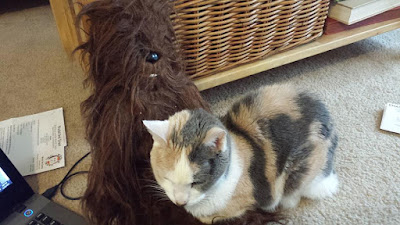 The Memes
There are so very many good ones that I think it's easier to link to an image search, but my favorite (that I have on a t-shirt I wear semi-regularly) is below. 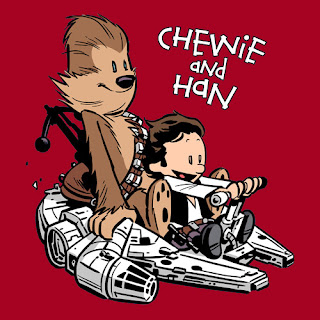 So, how about you? What's your favorite thing about Star Wars?
Posted by Jessica Olin at 8:10 PM