Working at an Overseas Library, by Kimberly Sweetman 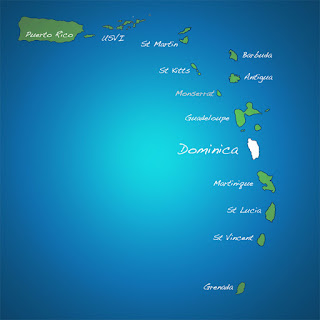 If I ever go on Jeopardy I have a topic to guarantee some kick ass small talk with Alex Trebec during my introduction. “So, Kimberly, you have lived in a country that most people have never heard of…”

It all started when my phone rang one spring day in 1997. I was working in Washington, DC, at my first-ever real librarian job. The job was at a grant funded information clearinghouse with somewhat unstable funding, so I was kinda looking for a new job. Then a former colleague called and told me he had something for me if I wanted it.

Before library school, I had worked in the Health Sciences Library at Emory University. One of the great things about the job was my colleagues. Every last one of them was fantastic. One, John, was studying for his MLS at the time we’d worked together, and when he finished he went to work as the Associate Library Director at an offshore medical school. When my phone rang in the Spring of 1997, it was John telling me he was leaving this job, and if I was up for a little adventure it was mine.

The school flew me down to Dominica for more of a meet-and-greet than an interview. I checked out the island and the campus and then got the inside skinny from John. He said it was an odd place, likening it to Rudolph’s island of misfit toys. While the natural beauty of the island was amazing there was no doubting it was the developing world. There was a lot of poverty and a significant lack of infrastructure. The roads were in disrepair and people drove like maniacs—as someone from Massachusetts I know rough roads and wild drivers, but this was beyond even my experiences. The campus was not beautiful—tin roofed temporary buildings that all looked identical. There was also the threat of hurricanes, tsunami, and volcanic activity.

But one thing stuck out in my mind: I could not think of a single reason not to take the job. Sure, the job I had at the time job was good but I was outgrowing it and who knew if it would even be there in a year’s time. I had no spouse, no mortgage, no kids. I didn’t even have a pet. I would be leaving lots of friends but even in 1997 we had email and phone service (although we wouldn’t have Skype for another 6 years). And there was one huge draw: the money I would earn. First there was the foreign earned income exclusion, the cap of which was higher than my salary. No federal income tax! And there was a seriously reduced cost of living. As someone struggling under $30,000 of student loan debt at the time ($5,000 of which I had already paid of thanks to cheap rent and a second job at Macy’s), this was an offer I couldn’t refuse.

The only obstacle that remained was telling my parents, who were surprisingly ok with it. I guess the moves I’d made to my first graduate school in Atlanta and the second, when I realized I wanted to a librarian, in Washington DC had prepared them. My mother’s reaction was perfect: “you’ll be able to say you spent your 27th year living in the Caribbean and you’ll have cocktail party conversation for the rest of your life.” She was right.

And so I moved to Dominica. It wasn’t always easy living there. Electricity failures were common, and I lost my water almost every day. Also, I had to start from scratch in almost every way—making friends, getting around, paying bills, buying groceries. I arrived on the Saturday of a holiday weekend to an empty refrigerator and shops closed for the next 36 hours. Thankfully my sister had sent me off with a generous portion of baked ziti that wasn’t confiscated by customs officials.

Socially it was hard. I had never before been the “other.” I grew up in a fairly homogeneous environment and living in Dominica was very enlightening for me. But eventually I learned to fit in. I made Domincan friends, friends I still have to this day. I also met plenty Americans and British, most of whom were a little unusual. A good friend—another American living on the island—described them as “two standard deviations from the norm.” The first was that they were academics, so somewhat odd already, and the second was that they were willing to move to a small island nation and work at an offshore medical school. It’s basically the same thing that John meant by “the island of misfit toys.” But in the end, that was part of the charm.

This experience changed me, and prepared me. I came home without any student loan debt and with a nice little bag of money. Because I was an assistant library director I was given management responsibility very early in my career that I never would have gotten in the US. I had to grow and adapt and change quickly, which helped me mature as an individual. I learned to appreciate what it meant to grow up in America which was something I had never considered before that point. Most importantly, now I know I can pick up and move to a totally new place and know that overall everything will be ok.

And you know what? I did it again. Four years ago my spouse called me and said, “I’ve got something for you if you want it: a transfer to Amsterdam.” Again, the only barrier for us was fear. Fear in the face of change is natural, but because of my experience in Dominica, I know fear isn’t reason enough to shy away. There may be legitimate reasons not to go on an adventure, but for me, fear isn’t one of them.

I’m not young anymore. Now I do have a spouse, a mortgage, a kid, and even some pets. But my adventure became part of who I am and taught me not to be afraid of change. It taught me to manage risks. I remember the day I announced my move to Dominica , a friend from college called me as soon as he heard. He was excited for me and said,“sometimes you have to grab the brass ring.” The public at large probably doesn’t think of librarianship as a particularly adventurous career move, but like any career, it is what you make it. And we manage change and risk all the time. We grab the brass ring.

After spending 20 years in library public service, Kimberly Sweetman now works as a consultant and coach helping libraries and library people to reach their goals and develop superior service through exceptional leadership. She blogs at kimberlysweetman.com and tweets as @sweetcoachcons. This is her second post for Letters to a Young Librarian. The first was "Are Your Colleagues Dumb? Read This."
Posted by Jessica Olin at 3:42 PM