That tweet up there got me thinking about how often movie quotes work themselves into my lexicon. Some of them I use so much that I have occasionally forgotten where/how I started using them. I thought it would be fun to follow Rebecca's lead, and come up with a list of my most frequently used movie quotes. (I could probably write an equally lengthy post about language I've borrowed from books and another one about television shows, but not yet.) 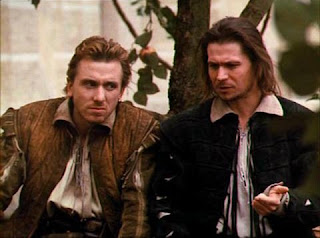 "It must be indicative of something besides the redistribution of wealth."

This quote is from one of my all time favorite movies (that was based on a play by Tom Stoppard): Rosencrantz and Guildenstern are Dead. I used it as shorthand for things that don't make sense but feel like they should make sense. And let's be honest: in higher ed and libraries, that feeling comes up a lot.

"This ain't my first time at the rodeo!"

When I tell people that I quote Mommie Dearest on the regular, everyone always thinks wire hangers. How is that useful in everyday conversation, huh? On the other hand, I have frequent opportunity to respond to someone who thinks I'm a newb when I'm not. What better way to express that than... 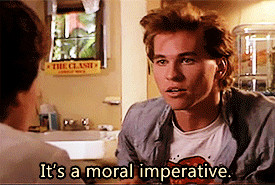 "It's a moral imperative."

Real Genius is one of my favorite movies from the 1980s. Like many movies from that era, I know it practically by heart. There are lots of other times I quote this fantastically 80s movie, but this comes up most often.

This quote comes up when I'm trying to talk someone into something they really want to do anyway.

There are so very many quotes from The Big Lebowski that are part of what I say daily. That comes up most often, but I've also been known to say:

"Obviously you're not a golfer."

But the most frequent quote is definitely from the scene where The Dude meets Knox Harrington. It's a useful internal dialogue I have with myself when random vendors cold call me. 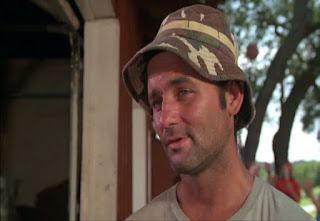 One of the all time most quotable movies, am I right? Caddyshack is also a guaranteed cheer up, feel good movie, even with all the misogyny and classism.

That line, though. So useful in so many circumstances, but most especially helpful when things are kinda crappy and I'm trying to make a joke of it.

So how about you? What movie quotes do you use regularly?
Posted by Jessica Olin at 9:00 AM