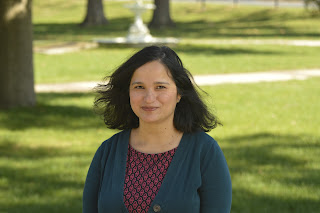 How long have you been in the field?
Ten years, which is a bit surprising to me as I type it.

How Do You Work?

What is your office/workspace like?
There is a decal of cherry tree branch on the back wall, a long workbench along the longer wall instead of desk precisely so as to not look like I am barricading myself in the office. Above the workbench, there are cabinets and a smaller nook area with decorations like a small marble owl, tea cups, and a gold dachshund tape dispenser. There is also a small table to greet students as they come in, and stacks of papers which make sense to me. Overall the space is kind of messy and also hopefully conveys (as some have assured me) a creative, “lived in” space.


How do you organize your days?
Based upon priorities; I keep a modified version of a bullet journal that is meant to record the flow of the day while keeping me on track. However, if someone walks into my office and really needs *my* help, I will drop what I’m doing. It’s basically the same way I teach. I always have a lesson plan but I improvise based upon necessity, excitement, opportunity; the class exists for the exact people in the room and I am at the library to be of service in the moment.

What do you spend most of your time doing?
Lately, I’m working a lot on an author event I’ve got coming up related to the Common Read at our campus. I’m co-chair of the Common Read committee, something I am hoping will continue to open up new dialogues about general education on our campus which is an important part of my job as Learning Design Librarian. As I type this, I’m realizing that I also spend a lot of time thinking about the interconnections between the different things that I do and trying to bring those to the forefront. Otherwise, I am more overtly thinking about how to pull off an information literacy program at our campus, or how to pull off some unlikely idea in my own teaching practice.


What is a typical day like for you?
Honestly, there are no typical days. If there is a typical feature of a day, I do rather enjoy that there are a bunch of librarians on my floor and that I can typically walk up to their office to talk to them about the “unlikely” teaching idea or something else.

What are you reading right now?
Love, Again by Doris Lessing and Salt, Fat, Acid, Heat, an astonishingly mind-blowing cookbook by Samin Nosrat. This cookbook is more of a primer than a cookbook relying on recipes; if someone is interested in cooking, they should really get it as it’s an incredibly informative and beautiful book with accompanying watercolors, charts. If you’ve ever done any theater, Love, Again focuses a lot on what it is like to be actively involved with people who do theater.


What's the best professional advice you've ever received?
Learn to say “no” to a bunch of things to facilitate saying “yes” to what really matters. I realize that Shonda Rhimes wrote about this exact same advice. However, I heard about it before that from a theater professor who had a great drawing on her office wall with the word “No” written all over it. I have since then made my own drawing and added a “yes” in the middle to emphasize that “no-facilitates-the-yes-that-matters” philosophy. Apropos of that, I’ve not been doing as well at that lately.

What have you found yourself doing at work that you never expected?
Last semester, I very nearly used the Heimlich maneuver on a student a few days after taking daylong CPR training. I was in position with my arms around him and then he was finally able to start talking. I didn’t hesitate at all, but I wouldn’t have predicted it.

What is your favorite word?
Delicious, with each syllable drawn out, as I like to say it with my two-year old when we try out a food that he ends up liking.

What is your least favorite word?
Synergy. I like the idea of it, but I dislike how it looks and sounds, especially when used in a neoliberal university sort of way. It’s the kind of word I picture in a boring logo. As someone who writes poems, I picture, taste, hold words. This one does nothing for me

What profession other than your own would you love to attempt?
Full-time writer or entrepreneur or both (cheating here).

What profession would you never want to attempt?
Accountant

What superpower do you wish you had?
The ability to touch someone and have them believe in their best self.

What are you most proud of in your career?
Acting as a research mentor in a special program to help someone not to fail out of college. It worked.

If you're willing to share, tell about a mistake you made on the job.
I corrected a colleague when he used the wrong singular noun of something.  It didn’t help other people understand him any better, so it was petty; it’s not a version of my best self (see my answer to the question about superpowers).

When you aren't at work, what are you likely doing?
Thinking about, researching, or writing for my current poetry manuscript, “Color Advisory Board.”

Who else would you like to see answer these questions?
Veronica Arellano Douglas, Jo Gadsby, Sofia Leung, Eamon Tewell (who was also nominated by Derrick Jefferson)

Michele tweets at @infolitmaven.
Posted by Jessica Olin at 9:29 AM