How long have you been in the field?
My first library gig was as a student assistant in 1998. My first full-time library job was as an interlibrary loan specialist starting in 2001. I’ve been at this library since 2006, first as non-academic professional staff, and then as a librarian starting in 2011.

How Do You Work?

What is your office/workspace like?
I’m lucky enough to have an actual office, with walls and a door and everything. I’m located in the reference suite of the Catherwood Library -- one of the three library locations that are part of HLM -- along with five other colleagues who also have offices.More specifically, my office tends to be somewhat unkempt (though I have a monthly calendar reminder to clean it), is lit by a $9 floor lamp from Target instead of the overhead fluorescents, and is decorated with labor posters and silly internet stuff I printed out. I used to have more explicitly geeky stuff, but I pulled that down after reading articles about how that could be off putting. The Ron Swanson Pyramid of Greatness is still up, though, as are these: 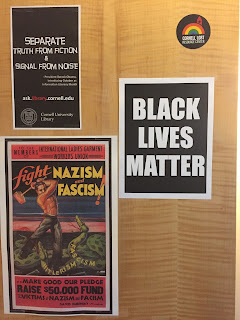 How do you organize your days?
I actually have a specialized way to use my email as a to-do list (which I described on Twitter). Between that and calendar reminders, I usually have a good sense of what I need to accomplish when I’m not in one of my many, many meetings.

What do you spend most of your time doing?
It’s tempting to say “meetings,” especially after that last answer, and some weeks really are dominated by them. I also spend a lot of the rest of the time on email. What both have in common, though, is that they involve me working with my peers here at the Cornell University library, with faculty, with colleagues from my professional organizations, etc., to move projects forward towards completion, or provide sustained service.

What is a typical day like for you?
I’ll let you know when I have one. :D This is my calendar this week: 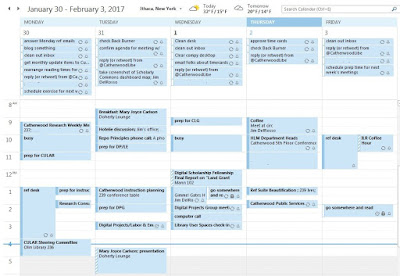 What are you reading right now?
The Book of Three, by Lloyd Alexander. The Prydain Chronicles were the first books I ever read, and I revisit them periodically. Right now seems like a very good time to do so.

What's the best professional advice you've ever received?
“The actor’s underlying motivation should be to get the hell back offstage.” Paraphrasing the late Stephen Cole, from whom I was lucky enough to take an acting class during my undergrad years. This advice has served me well as a teacher and a librarian. It’s helped me as I try to find that important balance between remembering that my interactions with those I work with are not about me, and not letting myself or my profession be erased or undermined.Do what you need to do, get them back to doing what they need to be doing, but don’t let them forget about you, either.

What have you found yourself doing at work that you never expected?
Learning Robert’s Rules of Order. Driving a van to New Jersey to pick up books (copies of which the library already owned). Contacting state agencies all over the country to ask about their collections of public sector collective bargaining agreements.

What is your favorite word?
Justice.

What is your least favorite word?
Metrics.

What profession other than your own would you love to attempt?
Acting. Every winter I grow a beard and tell myself I could play Henry in The Lion in Winter. Both help keep me warm.

What profession would you never want to attempt?
Library consultant.

What superpower do you wish you had?
That quasi-Akashic ability to tap into any piece of human knowledge that they had in the Matrix. Also super-strength and a healing factor, if I get to pick a whole suite of powers.

What are you most proud of in your career?
Probably contributing to DC@ILR, the open digital repository for Cornell’s ILR School. It’s really a peerless disciplinary repository for workplace issues, and I’m proud to be a part of it.I’m also pleased with my contributions to the Academic Assembly Steering Committee here at CUL. The Academic Assembly is the self-governance body for Cornell’s librarians and archivists, and as such I think it’s one of the most important things I could have gotten involved with. I’m currently chair of AASC, and I’ve really believe that the work we’ve been doing will make the Assembly, and the library, stronger institutions.

If you're willing to share, tell about a mistake you made on the job.
This is a tough one, because of the huge psychological distance between saying, “I mess up all the time!” and actually talking about a specific instance. Also, I have to be vague so I don’t put anyone’s name in the mix who doesn’t deserve it. So...A few years back, I chose not to recommend someone for a leadership position due to aspects of their work history. If you’d asked me at the time, I would have been adamant that those issues didn’t matter to me at all, but that I was concerned it would upset people further up the chain, cause problems for the project, etc. etc. rationalize rationalize rationalize.It was obviously a mistake, and even if the decision I made hadn’t caused problems for the project -- and it did! -- it would’ve been a mistake because I denied what I thought of as my better judgment to save myself some hassle. And because, ultimately, even if I really did believe what I claimed to, there was zero functional difference between the actions I took, and the actions that would’ve been taken had I believed otherwise.It was a mistake, and a failure on my part. I still think about it a lot. And I like to think I’ve learned from it.

When you aren't at work, what are you likely doing?
Playing some kind of game. Board games, RPGs, video games, these are very much my thing.OK, that’s kind of a pat lie. I’m probably reading something on my phone. But there’s a decent chance I’m reading something about gaming, or wishing I was gaming.And lately, more and more time has been spent reading and sharing stuff about politics. That’s always been there, but it’s getting more common, and I’m actually taking more action off of the internet in this realm, too.That’s likely to increase.

Who else would you like to see answer these questions?
Amy Buckland. Emily Drabinski. Fobazi Ettarh. Aliqae Geraci. Gr Keer. Kendra Levine.


Jim is on Twitter as @niwandajones.
Posted by Jessica Olin at 1:52 PM