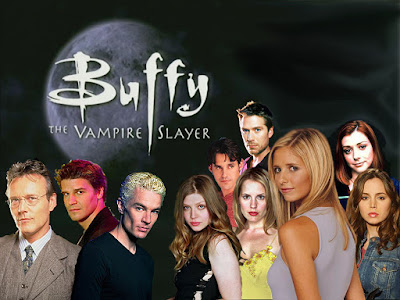 Here's the thing about being a fan of BtVS: it's a kind of equalizer. People who watched it when it was originally broadcast as well as people who are just finding it now have this lovely thing in common. It's not just the memories of Cordelia hating then loving then hating Xander, no. It's also about a common vocabulary. I once said, "Fire bad. Tree Pretty," to a friend, and he knew exactly what I meant (which was that I was too tired from doing hard but important work to have a coherent conversation). That's the best part of being a member of a fandom: the common vocabulary. I'm not going to try to convince you to watch this show. If you've clicked through to read this, I'm assuming you've already seen it. I'm assuming you love this show, too.

Now, let's talk about what makes it so fab:

William the Bloody, a.k.a. Spike


Let's be 100% clear: when it comes to all of Buffy's many love/sex interests, I have always been and will always be Team Spike. He's more fun than any of the rest. He values her for her, plus let's not forget that fantastic leather coat.

Also, I adore Anya. From her fear of bunnies to her love of capitalism, she was a great part of the show.

Once More With Feeling

And then there's the music episode. Yes, I know all the words to all the songs by heart. Yes, even "They Got The Mustard Out."

So how about you? Did I include your favorite thing about the show? If I missed it, let me know in the comments.
Posted by Jessica Olin at 9:00 PM

Email ThisBlogThis!Share to TwitterShare to FacebookShare to Pinterest
Labels: Just For Fun