Just For Fun: Martin and Zephyr

A little over a week ago on this blog, I shared some pictures of the newest feline members of the Olin household as a way to apologize for not having a real post on a Tuesday, but I want to introduce the felinity more properly, so... 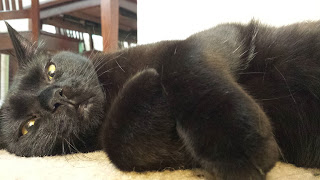 I adopted Martin the same day I lost Holly to her kidney problems. I'd had The Princess for almost 16 years, so I was pretty distraught and did not want be without a cat. He was 9 months old when I got him, so that means that Martin is younger than I wanted (Holly was 2 when I got her, and that was perfect), which has presented some problems, but he's calming down already and will (I hope) be out of his kitten-ness soon.

He is ridiculously cute and a total goofball. Martin is also clumsier than any cat I've ever known and I sometimes actively worry about him injuring himself as he careens around my apartment playing Kitty Parkour games. 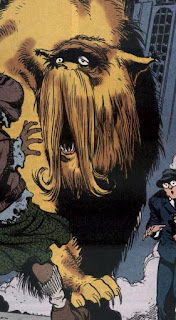 He is named for one of my favorite minor characters from Neil Gaiman's "The Sandman" series, Martin Tenbones. Tenbones is a creature of dreams who, out of loyalty to another minor character, crosses over into the waking world. I'd long thought I'd someday get a big fluffy real dog and name him after that big fluffy comic book dog, but then a tiny black cat with a tinier white ascot came into my life. My Martin isn't even half the size of the comic book Martin, but he's got enough personality to make up for the rest of the size difference. Thus "Martin Fivebones" was named. 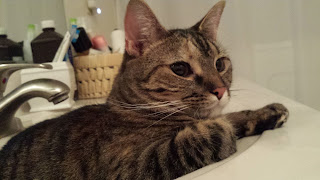 Zephyr came into my life a month later. Martin was/is... shall we say "rambunctious"? And I have the scars to prove it. I'd known for a while that I wanted two cats this time around instead of just one, and multiple websites recommended a second cat of similar age as a remedy for the OMG ENERGY of a cat like Martin. I was a bit more circumspect in adopting Z because I had more specific needs than just "must have cat in apartment." This time I wanted a cat of similar age and similar energy who couldn't be an only cat. That's why I went looking for her through petfinder.com, so I could refine my search and put my librarian skillz to work.

When I first met her, she was a bit heavier than she is now. She came from a no-kill shelter that keeps the cats in individual cages most of the time, so she wasn't getting as much exercise as she is now. Despite that, the first time we set eyes on each other in person she was atop a 6+ foot tall stack of cages - like she'd just flown up there. Like it was nothing to her. 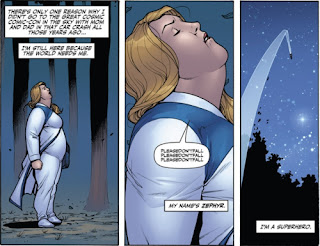 She is named for a comic book character who I haven't read yet, but still made a lasting impression. I had been talking about Zephyr, or Faith Herbert, earlier that day. You see, Faith Herbert is a for real fat superhero. Since most female superheroes seem to have "ability to fit in ridiculously small costumes while twisting into ridiculously impossible positions" as one of their superpowers, this Zephyr piqued my interest: a fat chick who can fly. So when I met my slightly fat cat who seemed to fly, name choice was easy.

Also known as:
They seem to get along most of the time these days, but the best way to describe their relationship is that of kid brother and older sister - he ALWAYS wants to play, but she sometimes gets fed up with him. I'll hear a noise that could easily be confused with a distant motorcycle, then I'll hear a hiss, and then I'll see Zephyr coming out from wherever she'd been hiding with Martin close on her heels.

I'm sure I'll be posting lots more pictures and videos of them, and if I ever learn to make gifs I'll post those, too. For now, I'm going to leave you with a video that to my eyes, captures their relationship perfectly. (Sorry for the background noise that's pretty much a foreground noise - my central air works wonderfully, but it is very loud.)