"Privilege" is a word that comes with steamer trunks' worth of baggage. For the purpose of this post, I am using this word within the context of social inequality, the unearned kind of privilege that comes at birth. For background, please refer to "White Privilege: Unpacking the Invisible Knapsack" and "Straight White Male: The Lowest Difficulty Setting There Is."

One further warning: this is a post where I'm not sure yet of the answers to my questions, but the ideas are still important to me.

I think of myself as fairly privileged. I grew up the only child of two working adults at a time when that wasn't common, so it put my family solidly in the upper-middle-class income bracket. I lived in a fairly affluent neighborhood of a Boston, MA bedroom community. Heck, I lived down the street - for a year or two - from someone who played for the Boston Bruins. Nobody you'd've heard of, but still he and his wife lived there. I'm also Caucasian and able-bodied. I never joined and have always been vaguely but insistently embarrassed by this, but I could be a member of Daughters of the American Revolution since I'm a direct descendant of William Whipple.

So imagine my surprise when I got this result for a BuzzFeed quiz on privilege: 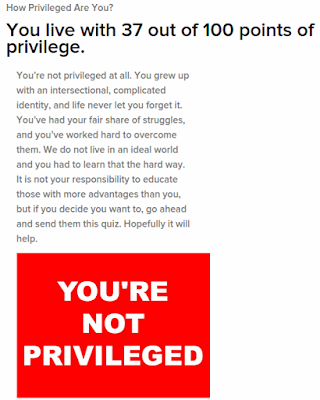 The thing is, that 63% of not being privileged doesn't show for the most part. There are questions on that quiz about never having to hide aspects of yourself, and wow I have done that. I've rarely told outright lies, but I've lost count of how many times I allowed assumptions to stand when I was a kid.

Yes, boys and girls and variations thereupon, I lead an intersectional life. I am a mixed up, messed up, wibbly-wobbly ball of privileged and oppressed.

And I'm not the only one. I've seen a number of people tweeting about this topic lately, but two individuals stand out:

Being white, my ONLY role in the black community is to listen to their lived experience and use my privilege to educate other white people.
— Brianna Wu (@Spacekatgal) July 24, 2015

If you're unaware, Brianna Wu is a video game developer and a self proclaimed "Gozilla of tech feminists." (She also has great taste in fictional leadership role models.)

Daniel Solis is an art director and a game designer. Yes, I own games of his. I also had the fun task of doing some editing for him recently.

Most of us have lives like this: some truths about us that are oppressed and minority, but other qualities that are considered "normal" and carry privilege. I know this isn't a particularly library/librarian oriented post so far, but it's so important to discuss this kind of thing. We, as librarians and educators, need think about our privilege and/or lack as we move through our worlds. It's especially important for us to consider other voices in our collections and our programming and our hiring. But the most important thing, to bring it back to where I started, is for us to know when to speak and when to shut up. The second one is so hard for me, I have to admit. I'm so used to being the one shouting about my own stuff that I sometimes forget to be quiet when it's not. But I'm learning to listen. I'm learning not to center my concerns when it's not about my experiences.

How about you? How do you handle the intersections in your life of privilege and the lack?

Email ThisBlogThis!Share to TwitterShare to FacebookShare to Pinterest
Labels: Call to Action, Politics