The "Snake People" Are Coming to a Generalization Near You 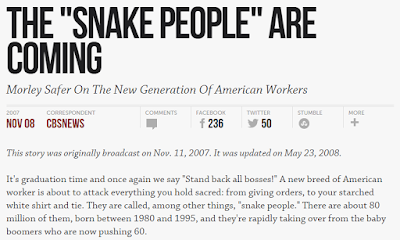 I hate generational labels. I remember when I first encountered "generation x" as a label for my generation, That article talked about members of Generation X all being a bunch of slackers straight out of some Hollywood film, but that wasn't me. I was working two jobs at the time and still had some problems making ends meet. I was working hard and was trying to find a way to work harder. Further, I wasn't the only one among my friends who was like that. I didn't identify with the portrait the article presented, and it made the term feel odd and divisive.

I hated it when the press was calling me and my friends "generation x" and I hate it now that people are talking about "snake people." Wait, what's that? You've never heard of snake people as a generation? That's probably because I mean "millennial" but someone in that generation got so fed up with the pictures people were painting of her and other people born around the same time that she created a chrome extension that substitutes the words "snake people" whenever a website has the word "millennial." (It does more than that, such as substituting "Parseltongue" for "digital native." Download it and read the Wikipedia article about Millennials for a good laugh.)

Why all this hate? I recently saw a semi-major media outlet tweet something about "millennials" and had a bit of a hissy fit in response:


What I got in response made me both cringe and laugh, since it showed the kind of resentment most people feel about the generalization inherent such labels:


The thread continued, including a brief related discussion about the uselessness of the term "Digital Native." And then Rachel Fleming (who writes a blog with Erin Leach that you should all be reading) made a point that gets at the the beauty of the snake people/millennials extension: 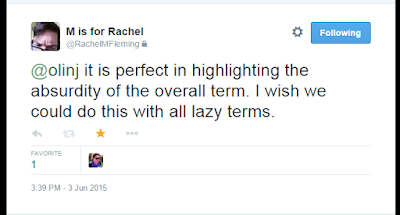 Terms like "Greatest Generation" are used lazily at best, and at worst lead to stereotyping (and are therefore dangerous). Let me give you a fairly innocuous example of what I mean: One of the most common preconceived notions that most people have about the GI Generation or the Greatest Generation is that they were/are tech averse. Meanwhile, my grandfather built his own computer when he was 90. If you believe those generational generalizations, you do things like forget to teach college students how to do basic things like attach a document to an email because "they're digital natives and grew up doing this stuff!" Trust me, as someone who has taught freshmen writing multiple times: they don't know how until they're taught.

When people tout the virtues of some think piece about how to manage millennials or the retirement habits of boomers, I cringe and so should you. We need to get to know our communities. We should have stuff about book clubs for senior citizens on our websites as well as on our bulletin boards. We need to remember that many of our students will have already worked intensively with research databases in high school but others will have barely used computers at all.

Don't get me wrong. I see that people of certain ages who lived the same country will have shared experiences that inform how they relate to the world. Things like the creation MTV (either you had it or were jealous of someone who did), the attack on the World Trade Center, and the televised presidential debates are embedded in our psyches, but they don't determine every aspect of who we are. So please, don't be that think piece writing futurist who pens yet another slapdash piece about "kids these days." Take a moment to analyze aggregate data and glean useful information to be shared, and put it in that kind of context. Always remember:

Email ThisBlogThis!Share to TwitterShare to FacebookShare to Pinterest
Labels: Call to Action, Labels