Just For Fun: Why I Am a Feminist 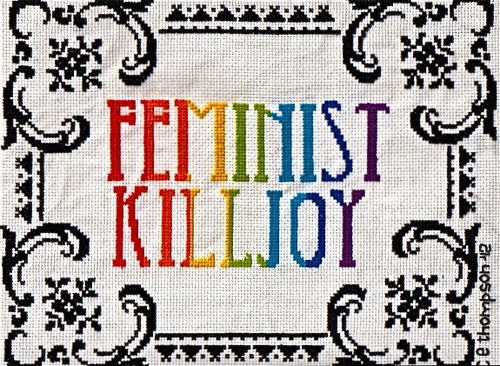 Why do I call myself a feminist? I know part of it was because I was raised that way, and because of the Women Power! of being in Girl Scouts for forever and a day. But I'm 41 now - long out from under the influence of my parents and of the GSUSA. So why do I still consider myself a feminist? Because I started paying attention. Rape culture and microaggressions are real things that I witness every day in higher ed. There was the overheard conversation in which a male student tried to assert that women become overly aggressive, too. (I butted in and asked him if he ever felt afraid when a woman came on too strong. Yes, this made him admit the difference.). Also consider the fact I'm tied into the much discussed whisper network that warns women in our profession against being alone with certain men. And how about the way that students are more likely to respond to my male employees when told to keep their voices down than they are when my female employees make a similar request. Further, I call myself "feminist" instead of "egalitarian" because women have been second and third class citizens for so long that people get upset when we even talk about wanting equal treatment.

Now, let me tell you why I decided to write this piece. An online acquaintance of mine disparaged feminism to me recently, and I got angry. As I started to think about my reaction, I remembered my own conversion from White Feminist to a feminist who happens to be white. It wasn't an easy shift, and it included a lot of self-recrimination. It hurt to realize how wrong I'd been, and how I'd hurt others with my ignorance, but I shut up and started listening and made it through. I realized I had to start respecting other people's experiences. I realized my own privilege at some point, and I suspect that the person who inspired this piece hasn't really realized that he is playing on "the lowest difficulty setting there is."

A quick aside: thank you to all the people who were patient with my "but not all whites! but not all cisgendered women!" b.s. along my path from White Feminist to white feminist.

Things my feminism encompasses: #GamerGate, "Fake Geek Girls", #teamharpy, Jian Ghomeshi, the seemingly unending list of transgendered people who were murdered pretty much because they exist... and this is a list just off the top of my head mid-rant.

To say I'm a feminist is to say that I want everyone to be treated equally, because there is so much inequality it makes me want to cry or scream or something. For me "feminist" encompasses socioeconomic and gender and sexual orientation and race and all the other ways in which we are sorted into categories that make us some how "less than." Yes, I'm angry about this a lot of times, but can you really blame me?

But I wanted to make sure it wasn't just me, so I polled my connections on social networks:


Serious question for something I'm planning to write: if you label yourself a feminist (as I do), why do you use that label?
— Jessica Olin (@olinj) October 21, 2014


It's worth clicking through to see all the responses, since I got some great ones, but this post is getting longer than I like, so I'm only going to share a few:


@olinj To reclaim it, because so many people have tried to twist the label into something it isn't. And because women are people.
— ℭ☺яαℓ ϟ♄ℯʟḓøη➸ℋεṧᶳ (@parody_bit) October 21, 2014


@olinj It's one of the few ist's I apply to myself because it's all I can do to combat oppression that's gone on for all of human history.
— Michael Perry (@michaelrperry6) October 21, 2014


"Because women have traditionally been oppressed (and continue to be in many ways), it makes it necessary to make an effort to ensure that women have equal footing to men. As Amber mentioned, it has to do with areas of career, but also in a million other ways--representation in the literary canon, etc." ~Nicole Wolverton

"I respect and admire so much the work of others who are known feminists that if I am going to read and emulate and teach their work that I would like to be considered the same thing as them. So I kind of think of the word as an associative term, if that makes sense? I've sort of tried to deal with that in class because I know that many times I come across young women who think of feminism as a dirty word or a word that they don't want to be associated with and I've said things like look, this is what feminists stand for, and wouldn't you rather be associated with people who stand for these issues than people who do not?" ~Susan Bobby

And perhaps my favorite answer:


"Because I refuse to let the label be co-opted by people who want to use it to attack people. The dictionary definition is very simple and contains nothing about tearing others down." ~Sarah Pavolko


So, there you have it. I'm a feminist because how could I not be? And please forgive the abundance of gifs - I needed something to cut the serious tone a bit.

How about you? Why do you use this word? Or not?

Email ThisBlogThis!Share to TwitterShare to FacebookShare to Pinterest
Labels: Call to Action, Feminism, Just For Fun