One of my favorite jokes from when I was a kid is about a cat applying for a job:


After posting an advertisement looking for a new secretary, a business owner was surprised to see a cat in her waiting room with a completed job application and resume. Not wanting to be rude, the woman sat down and interviewed the cat. At every step, the cat was a stand out applicant. The cat could file, type, handle Excel spreadsheets, and so on.

The business owner was still skeptical, so she said to the cat, "Okay, you've got all the other qualifications, but the advertisement says you have to be bilingual."

The cat cleared his throat and responded, "Woof."

Or, if you prefer a meme: 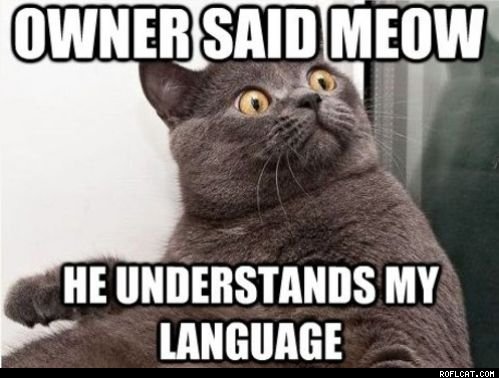 Why am I sharing these with you? Other than being a crazy cat lady, I do have a point to make... a point about bias and culture in libraries and education. I had a quick conversation about cultural bias with Meredith Farkas in response to a tweet she sent from a session she was attending at Library Instruction West. Language is only one example, albeit an obvious one, of the ways in which bias and cultural differences can play out. As an industry, libraries and librarians work so hard to be accessible to our communities, employing user experience professionals and even customer experience specialists to help us smooth the way, but so many of us are guilty of forgetting the cultural aspects of the library and/or educational experience. Even though we do forget, it's still an important consideration, because

@olinj agreed. We express our cultural beliefs, biases, etc. in everything we do. #liwest14
— Meredith Farkas (@librarianmer) July 24, 2014


Here are some ways in which I've had culture and bias problems in professional settings:

Yes, I've been on both sides of confusion arising from cultural beliefs, biases, etc. I know about shopping malls since I grew up in the U.S. I use pedagogical lingo because I have an MAEd. I like to think of myself as mindful, but really, there's no way to get away from these little and big confusions. Even things that I think of as basic - such as which side of the stairs to use when you're passing someone who is walking in the opposite direction - are not actually basic. Heck, not even all Americans have identical cultures and biases (regional slang used to give me fits when I was in undergrad).

So how do you deal with it? Especially since there's no way to avoid expressing these beliefs, you need to be mindful and aware of your audience and yourself. If I hadn't been paying attention to the body language and expressions of my audiences, I never would have noticed that the class was confused about shopping malls or that the committee didn't speak pedagogy. Dealing with "bowling alley" took a different skill - being willing to ask questions when I'm confused. As for that last one, all I can advise is patience.

Really, patience and mindfulness are the key in all of this - be patient with yourself as you learn and be patient with those around you. Just don't expect everyone to be dog-speaking cats. That's a one in a million.