Just for Fun: Meega, nala kwishta!, or My Love Letter to Lilo and Stitch


I could easily publish an entire post with nothing but gifs of my favorite moments from Lilo and Stitch, but it would end up being pretty much the entire movie in gifs. As much fun as that would be, it might overwhelm the servers at Blogger and it still wouldn't capture everything I adore about this movie. You can see there are still plenty of gifs, but I'm also going to try to describe why this movie has so captured my heart.


Even now, sitting here writing about this movie, I'm having a hard time not giggling at these gifs and videos. As many times as I've seen it (and I've lost count at this point), Lilo and Stitch still makes me laugh.


I love that there's a size acceptance theme running through Lilo and Stitch. Lilo is obsessed with taking pictures of big male and female tourists, and she is enraptured by them - she thinks they are beautiful. Some may laugh at those moments and think there is something wrong with this fictional little girl. Not me. Even the two most prominent female characters are built like real people and not like the typical Disney heroine. 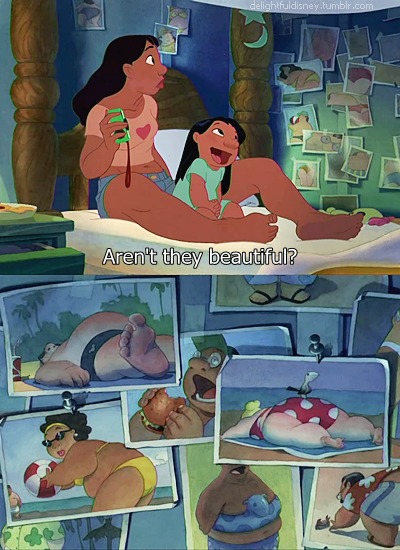 I also love that it's a redemption story. Stitch is created to destroy, pure and simple. In the words of his creator, "His destructive programming is taking effect. He will be irresistibly drawn to large cities, where he will back up sewers, reverse street signs, and steal everyone's left shoe." But through luck (landing on an island without large cities throws a wrench in the works) the acceptance and love of a little girl, Stitch becomes a model citizen.


But most of all, I love Lilo and Stitch because it's about making your own family. Lilo's parents died prior to the start of the movie, and Lilo's older sister is having a hard time with keeping what's left of their family together. Then along comes Stitch, who seems to make things worse for a while, but in the end makes things so much better. My favorite quote from the whole movie, and one of my favorite movie quotes of all time, is in the first thirty seconds of this clip from towards the end of the movie:

"This is my family. I found it, all on my own. Is little, and broken, but still good. Yeah, still good."


How about you? I'm assuming you have affection for this movie otherwise you wouldn't have made it all the way to the end of the post. What do you love about Lilo and Stitch?
Posted by Jessica Olin at 9:51 AM