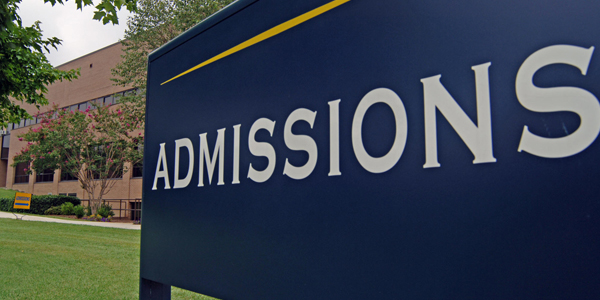 I've written before about how student retention is part of the responsibility of academic librarians, that it takes a whole college to graduate a student, but the truth is that it also takes a whole college to recruit the student in the first place. That's why I've spent time, a lot of it recently, building a relationship with the office of admissions at my new institution. It was long overdue, but I finally attended an admissions department meeting recently and I'm so glad I did,

I'm not 100% sure what they were expecting, but when I said, "I want to know how I can help you," they were obviously, and pleasantly, surprised. (Well, everyone but the Assistant Director of Undergraduate Enrollment, with whom I'm friends because we bonded over our shared love of Doctor Who shortly after I came to campus.)

After that general offer of assistance, I talked to the members of the admissions department about why I want to help them. Not everyone realizes it, but prospective students and their parents do take the library into account when making a decision about colleges. You won't be shocked to hear that the ACRL has a guide for prospective students to use when evaluating university and college libraries, but it might surprise you to hear that US News & World Report has something similar. In fact, at my previous institution, we created a page on the library's website that linked to those two documents as well as to the admissions department's web presence.

After I talked the admissions department up, I made my big move and revealed the reason I had wanted to connect with them in the first place. And that was this: I offered to come up with a list of talking points about the library for the admissions counselors and the student tour guides. I have overheard some wonky things being said by people leading these tours in my six months here, and I wanted to correct them, but I didn't want to overstep my bounds and offend the very people from whom I want help. I've worked at colleges where admissions got a bit huffy about how tours were conducted and, while the library was encouraged to correct mistakes that were made, we weren't really supposed to tell student tour guides what to say. Those admissions departments had their reasons for wanting the content to come from the tour guides instead of the library. Since I'm still learning the culture of my new institution, I tread very carefully as I tried to further my agenda.

I'm pleased to say that my offer was very warmly received. Huzzah! A major librarian win over which I'm still smiling a couple of weeks later.

If you're curious, here are the points I sent:


Since then, I've been doing some judicious eavesdropping. Some of what I've asked them to say was already in their repertoire, but most of those things weren't really on admissions' radar. I've heard them using the new talking points (yay!) and only had to pass along one correction to the assistant director. I want a consistent message going out to prospective students and their parents, so I'm going to have to keep vigilant. At the same time, I want to be sure to keep the admissions people happy, so I don't want to ride them too hard about it. The whole thing will be a balancing act of sorts, but it will be worth it.

Besides, when all else fails, I can interact with tour groups myself. Seeing the director when they come through lets parents know that we aren't kidding about the personal attention students get in a small college setting and it lets prospective students know that I'm approachable. That way we all win.

How about you all? Those of you who are (or who want to be) academic librarians, how much do you work with your college/university admissions department? Any tips to pass along?
Posted by Jessica Olin at 8:46 AM